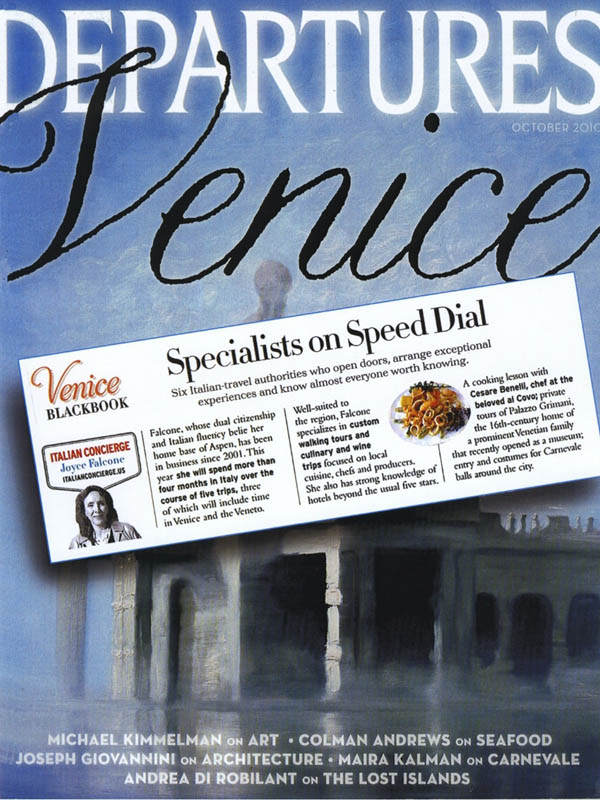 Joyce Falcone is considered one of the "Six Italian-travel authorities who open doors..." by "Departures, Venice" magazine, October 2010 issue, page 45.

Falcone, whose dual citizenship and Italian fluency belie her home base of Aspen, has been in business since 2001. This year she will spend more than four months in Italy over the course of five trips, three of which include time in Venice and the Veneto. Well-suited to the region, Falcone specializes in custom walking tours and culinary and wine trips focused on local cuisine, chefs and producers. She also has strong knowledge of hotels beyond the usual five stars. A cooking lesson with Cesare Benelli, chef at the beloved Cove; private tours of Palazzo Grimani, the 16th-century home of a prominent Venetian family that recently opened as a museum entry and costumes for Carnevale balls around the city.

About The Italian Concierge

The Italian Concierge is a tour operator who  designs  luxury custom vacations to Italy for  families and individuals, honeymooners, and groups. Joyce Falcone founder and principal, began her involvement in Italian tourism twenty four years ago while working as a tour guide in Italy for US travel companies.

The Italian Concierge is considered an expert in the field of travel to Italy and her agency has assisted thousands of travelers planning custom itineraries to Italy. It is from this dedication and passion for her work that Falcone has earned continuous recognition from national travel magazines for her expertise as an top travel agent in the field of Italian tourism.