On the blog, we usually like to keep things short, but we recently did a feature on Italian beaches in the newsletter, and I couldn’t contain myself.

With 4,725 miles of coastline with beaches of every color, temperature, variety and backdrop, it’s impossible not to gush.

Since Roman times, the coasts of Italy have hosted vacations to stars and powerful political figures from around the world. But they're not just for the rich and famous, of course.

For the summer, Italians everywhere decamp to the coast, whether near, such as the lucky Ligurians and Puglians who really don't have very far to go, or far, like the Romans who head to glamorous Amalfi or Ponza, undiscovered by US market, or the well-heeled Milanese who like to spend their summers "roughing" it in Calabria or travel down to the heel to Puglia.

Here’s our guide to Italy’s best beaches on each coast of the boot:

How to Tip in Italy: The Italian Concierge Tipping Guide

How much should you tip in Italy? What is a “normal” percentage to tip in Rome? These Italian tipping custom questions t some point in your trip to Italy, these questions

If you leave a “normal” American tip, depending on where you are, the recipient may try to give it back to you, saying you paid too much. The waiter may even run out of the restaurant after you!

But this typically happens more in smaller towns, the kind of places where the proprietor is much more likely to give you an after-dinner amaro for free or take dessert off your bill for no reason than stiff you on extra service charges.


What to Tip in Restaurants in Italy

Rome, famously, has outlawed several types of service fees and charges added to the bill in light of confused visitors who don’t understand why they are being charged for bread even when they didn’t ask for or eat the bread.

Still there are many places where various fees, including for service, are added to your check automatically. You’ll usually see one fee called the coperto or pane, which is not for bread but actually more of a per person basic charge for dining in a restaurant.

“Servizio,” or service, is also often charged automatically on restaurant bills, in part because waiters in Italy are paid very differently than in the U.S. (i.e. better), but also because you will often be helped by multiple people throughout your meal.

You don’t really have to leave anything in addition to this, but it is customary to round the bill and leave some extra “spiccioli” or loose change with the rest of the bill.


Tipping for Taxis and Other Services in Italy

Outside restaurants, the tipping situation is much easier to navigate. In taxis, tipping is not necessary and you can tell them to keep the change.

For porters or maids at the hotel, follow the standard one euro per bag or room night formula

For guides, translators, drivers and other special, personalized services, tip as you feel appropriate, but 10-20 euros for a full-day is customary.

See My Talk at the NYTimes Travel Show! (on video)

As you may have seen recently via email, I was fortunate to be selected to speak on a panel at the New York Times Travel Show earlier this month with several other Italian travel specialist:


In "How to Plan a Luxurious (But Affordable) Italian Vacation," Susan Van Allen, a friend and author of "100 Places in Italy Every Woman Should Go" and "Letters from Italy," moderated a panel of experts to help travelers enjoy Italian luxury without breaking the bank.

To be completely honest, I was very nervous beforehand. Though I've been leading tours for decades, that's different than sitting, facing a group of people you don't know at all, and hoping they're interested in what you're saying!

I ended up being very surprised though, because the other panelists didn't have a lot to say and ended up taking notes on what I was saying (!). In particular, I talked about the kind of experiences that a travel specialist can arrange for you through the people they know in Italy that can really add a sense of luxury to your experience even without an over-the-top price tag.

Watch my whole talk on YouTube here or the embedded video above.

Shopping in Italy: What You Need to Know

Shopping in Italy is kind of inevitable.

You may end up with a suitcase full of gourmet goodies or wine bottles (here’s how to pack them), housewares or high fashion. But first you have to navigate the cultural nuances of shopping in Italy.

Shops open on the later side, often around 10 am. Most non-chain shops, boutiques and handicraft shops close for an extended lunch from 12:30 or 1pm to 3 or 4 pm. In small towns, absolutely everything will close.

In major city centers, most things stay upon through the lunch break. Stores, even in smaller towns, are open later to compensate, usually till around 7:30 or 8 pm.

When you arrive, you must say hello (buongiorno during the day and buona sera in the afternoon) to start a respectful relationship with the shop keeper. Otherwise they will find you very rude.

You, on the other hand, might find it rude when salespeople come into your dressing room while you’re trying things on to help you squeeze into a tight pair of jeans. Salespeople in Italy are very hands on, but it is just because they are passionate about helping you find something you like.

Commas replace a periods on price tags, and tax is already included. You can’t pay anything that is less than EU10 or 20 Euros with a credit card. Always bring cash with you for the smaller purchases.

Be very confident before you purchase anything, because store exchanges essentially don’t exist.

I just received this email and had to share it with you all:

This is a great price for flights to Italy. I haven't seen many flights lower than this in a while, and Emirates is a great airline. It was recently awarded Center for Aviation Airline of the Year award for the third time.

It makes me want to go back for a weekend in December to go Christmas shopping!

In case you missed our update about their new route in the June newsletter,  Middle Eastern airline Emirates entered the U.S.-Italy market with a bang, offering nearly twice as many seats per day as the airlines currently servicing the route.

Beginning October 1, it also became the only airline to offer a true luxury flight experience between NYC and Milan. Each of its 777-300s planes has 12 first-class suites and 42 lie-flat business class seats.

Sweetening the pot even further, if the Emirates sale doesn't work for you for some reason, domestic carriers have created interesting offers to try to match their new competition. 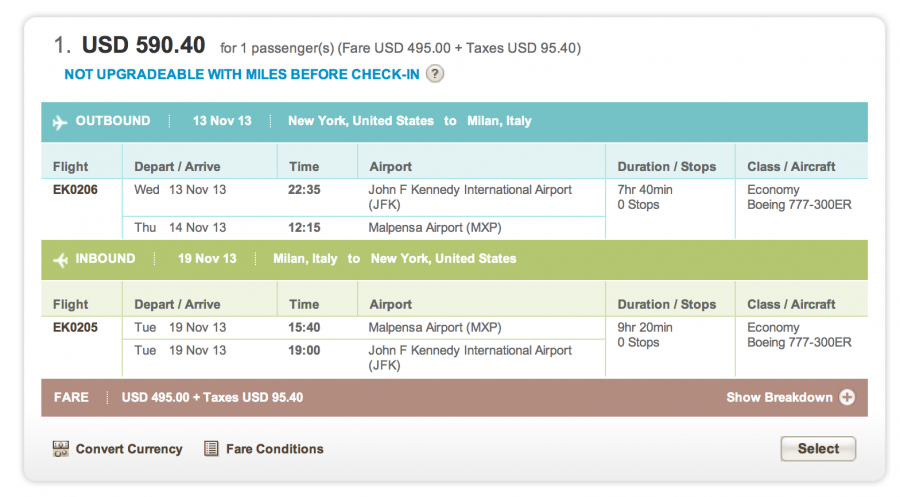 Delta has matched Emirates prices (even going a bit lower in some cases) and offered extra frequent flyer miles on this route.

If you've been waiting for the right time to book flights, we won't see a fare face-off like this again for years.