Santa Chiara: A Breath of Fresh Air + Spirituality in Naples 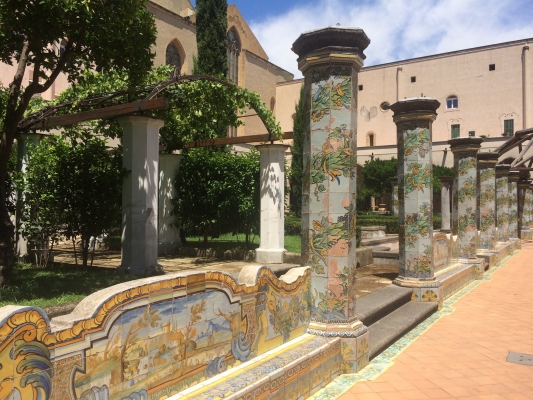 In a bustling city like Naples, it can be difficult to find peace and quiet, especially in the city center.  But the other day while strolling among the crowds of tourists and street vendors, I decided to duck into Santa Chiara, a church/monastery complex I had walked by a few times before.  The few euro I had to pay for entry proved to be more than worth it.  Upon entering the courtyard of this 14th century convent, a feeling of complete peace and serenity washed over me.  I was taken back not only by the beauty of the courtyard (more formally known as the Cloister of Clarisses), but even more so by the peaceful, even euphoric feeling that made it easy to recognize this was a place of spiritual refuge.

The cloisters are undoubtedly beautiful, with hundreds of brightly colored majolica tiles, depicting sprightly scenes of farmers harvesting their crops, with bushels of fruit and flowers in golden yellow, green, and royal blue.  The gardens, the work of Domenico Antonio Vaccaro in the 18th century, are lined with stone tiled benches and octagonal columns, centered around a pergola and surrounded by frescoed walls.

One could spend a good chunk of time admiring the religious frescoes, painted tiles and garden structures, but here at Santa Chiara there is even more to see!  The religious citadel includes a double convent (Clarisse and Franciscans), a Gothic-Provencal style church, on site museum and archeological area.  The church was completed in 1328, under the order of Robert of Anjou and his wife Sancia, but was largely destroyed by the WWII bombardments of 1943.  After the war, it was restored to its original Gothic form and today stands proudly in the center of the city (Via Santa Chiara, 49). 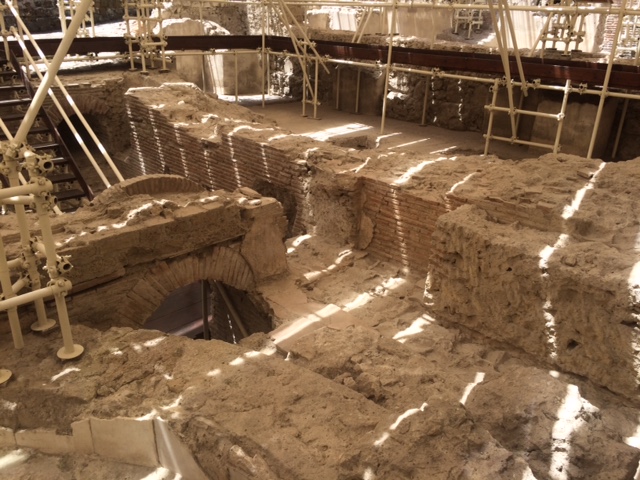 The Santa Chiara museum contains information and artifacts on the history of the convent, church, and materials salvaged after the fire of 1943.  Just a few steps outside the interior part of the museum you will find an archaeological area that offers a look into one of the oldest remaining areas of the city, dating back to the Roman city of Neapolis.  The area has been completely excavated, allowing visitors to stroll along the scaffolds and admire the ancient ruins, including a roman bath complex from the 1st century AD.

With all that Santa Chiara has to offer, perhaps the most precious is the feeling of tranquility you can find here.  An afternoon in Naples well spent!