After 17 months of repair work, the famed Trevi Fountain will finally be unveiled this month in Rome.  Nearly 2.2 million Euro (2.98 million dollars) was spent by Fendi, the company funding the restoration project.  That’s a lot of coins to throw into a fountain!

The iconic Trevi Fountain is visited by millions of tourists every year, but after general wear and an exceptionally harsh winter in 2012, parts of the structure began falling off.  As concern over the fountain’s condition grew, Fendi stepped in to finance the repair project.  According to the deal made with the city of Rome, Fendi’s logo was permitted to be displayed on construction site signs during the repair, and will be allowed to hang a plaque near the monument for four years after completion of the project.

Fendi was founded as a leather goods business in Rome in the 1920s, and in funding the restoration is paying homage to their home city.  In addition to financing repairs on the fountain, they are moving their headquarters to Palazzo della Civilta Italiana, one of Rome’s most recognizable buildings.  The palazzo was built by Mussolini for the 1942 World’s Fair, interpreted by some as a modern take on the Coliseum, but was never debuted due to Italy’s entrance in WWII.  The stark style of architecture, a travertine cube perforated with 216 arches, is reminiscent of fascist era architecture.  Fendi’s move this year marks the fashion house’s 90th anniversary, as well as creative director Karl Lagerfeld’s 50th year with the company.

Financed by the world famous fashion house, repairs on the 300 year old fountain began nearly two years ago, and the opening date keeps getting pushed back.  The work is set to finish this November, however the fountain has reminaed open to the public during the repair work. 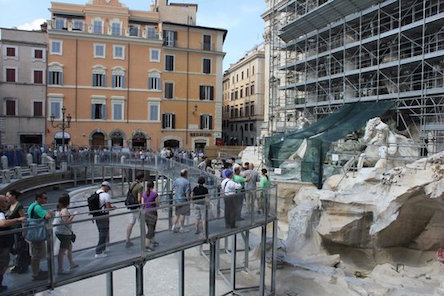 Work began in June 2014, and after months of construction, tourists and local alike are eager to see the project unveiled.  In addition to general maintenance repairs and reconstruction of certain elements, a plexi glass bridge was installed to create an unprecedented observation point.  While the construction is taking place and preventing visitors from seeing some parts of the fountain, the transparent bridge will allow admirers to experience Trevi like never before.  The suspended walkway was built on artwork designed by Nicola Salvi, and can accommodate up to 200 people.

Another addition to the project was two screens showing current and historic images related to the fountain.  The famed monument was open to the public during construction, although many were disappointed about the scaffolding, obstructed views, and lack of water.  For those who want to stay up to date on the progress from afar, there is a live web cam that broadcasts many of Rome’s famous monuments in real time.  Make sure to check out the "time lapse" feature to see a 24 hour period in the life of Italy's top attractions.

One of Rome’s most iconic images, the Trevi Fountain was commissioned by Pope Clement XII in 1730, and served as the end point of one of Rome’s aqueducts which supplied water to ancient Rome.  We can’t wait to see the new and improved Trevi fountain!