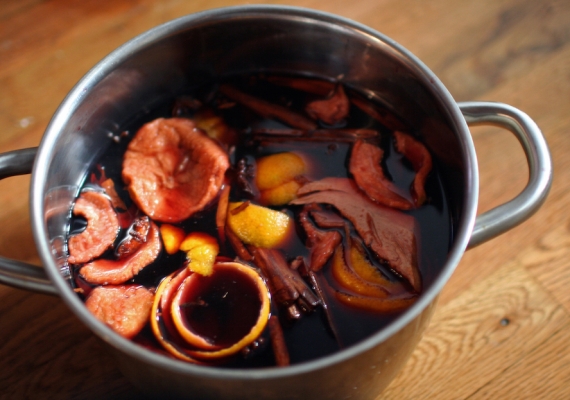 Whether you are lucky enough to be in Italy, or are stateside dreaming of your next trip, you can battle the winter’s cold with a warm cup of vin brulé! As the winter drags on, take a page from the folks in northern Italy, where soul-warming spiced wine is enjoyed during cold months. The drink is quite similar to mulled wine, and can be found in northern regions of Italy such as Venice and Piedmont. The name comes from the French “vin brûlé,” which literally translates to “burnt wine.” This is due to the fact that in the traditional preparation, the wine was served flambé style by lighting the surface on fire.

In Italy as well as in many other northern European countries, this hot, spiced, mulled red wine is served from Christmas into the winter months. While Christmas season is behind us, there’s still time to enjoy this cold weather treat.

The tradition of adding spices to wine is believed to trace back to Ancient Greece. The tradition of drinking the ancient wine hippocras was kept alive by Italian monasteries and later during the Victorian era. The drink is popular is many European countries, and recipes vary from region to region. Below we will share a basic recipe, but one can find variations such as adding fruit, egg yolks, white wine, brandy, or letting the mixture sit in a clay pot for at least 24 hours.

Lucky for us, the recipe is quite simple, and forgiving (a pinch more of less of sugar or spices won’t be noticed). Delight guests at your next get together with this warm weather treat brought to you by the Italian Concierge!

Directions:
Peel the skin from the orange and lemon.
Combine the fruit skin, spices, sugar, and just enough wine to cover the sugar in a saucepan.
Heat the wine to boiling and stir constantly until it becomes a syrup, then add the rest of the wine and warm over stovetop (make sure it’s not boiling).
If you want to follow the traditional mode of preparation (and are diligent about fire safety), light the surface before serving.
Serve into punch glasses or mugs and enjoy!

Note: For a ‘no fuss’ version, the recipe can also be prepared in a crockpot. Just toss all ingredients together and heat.