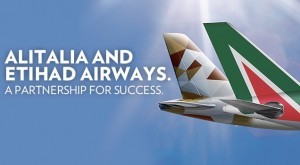 Italy may be known for style and excellence with most of its major brands—Ferrari, Prada, Alessi—but for decades, Alitalia, the national airline, has been somewhere between a laughing stock and a national embarrassment.

When Emirates started its route between Milan and New York, Italian business people were elated to have an appropriately refined option for important business trips. But now another swanky Middle Eastern airline has thrown its hat in the ring: Etihad.

Etihad and Alitalia: A Five-Star Match Made in Heaven?

Rather than offering Etihad flights, which would be a book since the airline has recently made a splash by offering a full three-room apartment aboard its double-decker A380s, which also have first-class suites big enough to walk around, Etihad has bought a huge stake in flailing Alitalia, which was also recently bailed out by such an unlikely investor as the Italian post office!

This January, the two airline officially announced their new partnership, which is now positioning Alitalia as essentially an arm of Etihad, including allowing members of Alitalia’s MilleMiglia frequent flyer to earn and spend their miles with Etihad and its other partners, which include other European airlines like up-and-coming airberlin.

Etihad has announced that the MilleMiglia program will “expire” at the end of December this year, but there is no work yet on what comes next. Etihad now owns 49% of the airline, so they are setting the agenda moving forward, and it sounds exciting so far.

As part of the new endeavor with Etihad, Alitalia has also announced a comprehensive restructuring program that includes both cost-cutting—though many wonder what is left to cut—with growth, including the addition of new routes.

From Alitalia’s hub in Rome, new service will connect to San Francisco as well as a collection of global capitals, including Beijing, Seoul, Mexico City, and Santiago, and additional flights will be added to the Chicago and New York routes.

In addition to more flights, Alitalia and Etihad have promised to unveil new food, lounges, and designs for both the crew uniforms and places sometime during the 2015-2017 transition period.