Joyce Falcone has not set their biography yet As the Savoy kings were consistent and constant in their growth and reorganization of the city, UNESCO chose to include the site in its World Heritage list because it provides a comprehensive overview of European monarchical and monumental architecture from the 16th to 18th centuries.
in Hiking in Italy 2335 0

Cell Phones in Italy - What do You Need? Even though cell phones are so ubiquitous in Italy that even the most elegant, old-fashioned grandmother has four in different colors to match every outfit, it can still be difficult, if not expensive to stay in touch with the U.S. while you’re in Italy if you don’t plan ahead.

As an avid hiker and leader of Italian walking tours for many decades, I’ve seen many of Italy’s best mountain vistas many times.

But as a resident of Aspen, Colorado, I clearly also love to ski, and last year I was delighted to experience Italian ski culture head on.

Skiing in Italy is a case of extremes: the slopes are world-class, the food is Michelin-starred gourmet, and the skiers are top European and American celebrities.

Even with all that going for Italy’s ski resorts, they’re remarkably accessible. And with 237 main resorts to choose from, you’re spoiled for choice. In the Alps, in the Alto Adige region that was a part of Austria until 1919, the mountains around the regional capital Bolzano offer a chance to try Austrian-Italian fusion food, great skiing, and stunning scenery, including Seiser Alm, the largest Alpine meadow in Europe and one of my favorite hiking spots in warmer weather.

But though Italy has been blessed with a slice of the Alps, the nearby Dolomite Mountains are home to some of the country’s most prestigious skiing. In the Dolomites, Cortina d’Ampezzo, home to the 1956 Winter Olympics and a famous James Bond chase scene, has become a particular favorite among celebrities.

I hit the Dolomiti Superski last year, with 36 lifts and 87 miles of runs and ski-in restaurants where you can really spoil yourself. If you make it up there, head to La Posta Hotel in the center of town for the best apres ski.

And like many things in Italy, one of the best parts of skiing in Italy is the meals!

Though the interiors seem like simple rustic wooden cabins and you’re welcome to wear your ski gear, the servers are all suits and the food is Michelin-starred.

Italy truly holds the most natural and cultural wonders in the world.

But don’t take my word for it. UNESCO has awarded Italy the most World Heritage Sites in the world: 49.

Wondering who has the second most? That would be China, the fourth largest country in the world. Italy could fit in it almost 32 times.

To recognize and reflect on Italy's greatest cultural achievements, I'd like to share the wonders of Italy (according to UNESCO at least, since we share Italy’s gems large and small with you every month) by region in our new series on Italy’s UNESCO Heritage Sites.

Though for travelers, Puglia often takes a backseat to the northern art cities—Rome, Florence, and Venice—or better known historical sites in Sicily, Rome, and Pompeii, the heel of the Italian boot was a crucial point of strategic and cultural importance for millennia.

When the ancient Greeks came to Italy, this was often their entry point. When foreign conquerors sought to subdue the peninsula, they needed Puglia’s ports. And in prehistoric times, the fertile Puglian soil and idyllic weather provided a perfect spot for budding civilizations.

Puglia’s UNESCO Hertiage Sites reflect all of these moments in history: Inland, among Puglia’s mountains and olive groves, Alberobello offers visitors the best opportunity to spot a type of architecture found nowhere in the world but Puglia.

These conical houses are made entire without mortar, the glue that holds most types of pre-modern buildings together. Yet the present buildings date back to the mid-1300s, and have mostly been continuously inhabited since.

It looks like something out of Lord of the Rings, and honestly, Castel del Monte is only slightly less mysterious.

We know that it was built by a northern conqueror, Frederick II of Hohenstaufen, in the 13th century, but it echos more of a Near Eastern or North African dessert castle than of a structure you’d find in the northern European Gothic tradition at the time.

Stranger still, it has medieval Asian plumbing systems, a strikingly perfect mathematical and astronomical plan reminiscent of Arabic structures, and yet it never seems to have endured a battle.

With so many visitors each year taking in Italy’s cultural heritage, it’s important to do our part to help protect and upkeep it as well.

As mentioned in the past, each year The Italian Concierge donates to FAI, which protects, restores, reopens to the public and reinvigorates Italy’s splendid jewels of art and nature. This year much of our $5000 donation went to restore two frescos at Santa Maria del Cerrate near Lecce in Puglia, so it seems appropriate to begin our series with Puglia.
in Italy travels 1980 0

Report from the Road: Truffles 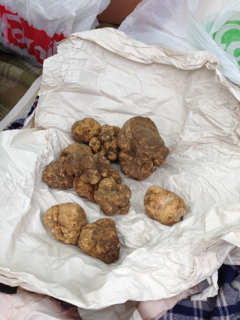 Here is the scoop. They true truffle hunters go out only at night, secretive with only their dog and do not use a flashlight or else others will see them and know where their spot is. So they go alone, or with the dog. Any dog will do, just needs a trained snout. when you find them you place them in a newspaper and wrap them up. They last about 5 days 1 week. Stored in a paper towel and then places in a jar. Open the jar once a day ( and sniff).